In 1970 Fred Yates embarked on a commission to paint the Castles and Cathedrals of Wales.

At Clover Antiques a small Antique shop in Taffs Well north of Cardiff Lorna McBride and her husband Mac were about to settle for the evening. When the doorbell rang and Lorna answered, standing in the doorway was a rather cold and weary looking Fred Yates.

Caerphilly Castle from the Welsh commission 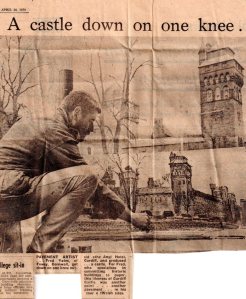 Fred explained what he was doing in Wales
and why he was calling at the McBrides. He told them how hungry and short of cash he was, enquiring whether they would like to buy a painting. The Mcbrides took pity on the artist inviting Fred in, prepared him a meal and
subsequently bought two paintings.

When he returned to Fowey Fred wrote to the McBrides thanking them for their hospitality and support. In the letter he says:

Fred ends the letter with a PS 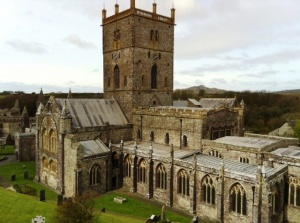 This was obviously a very productive time for Fred and typical of the work ethic and enthusiasm that he was to continue with throughout his life. Also very typical is the way that Fred was helped and encouraged by patrons that found him a gentle and warm man who they felt compelled to assist.

This was to become a recurring theme in the Fred Yates Story.

5 Responses to Fred in Wales