Fred Yates spent the last (very productive) years of his life in the mountains at La Motte-Chalancon, a picturesque medieval village in the Drome department in southeastern France. 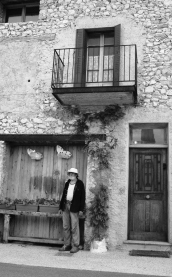 Fred Yates in front of his house in La Motte

Francis Mallett writes: Fred arrived (at La Motte) in a tough winter with daytime temperatures rarely above freezing. At over 80 years of age, it still didn’t prevent him going out every day to paint in the village, producing one of his most extraordinary, intense series of paintings. “I’ve done more work in six weeks here in La Motte than six months anywhere else,” he wrote. “No other painter, not even Bratby, could have produced so much work, at such a great age and under intolerable freezing conditions.”

Indeed Fred Yates was a prolific painter and would get through very large quantities of paint and canvas. His usual outlet for artist materials was in the nearby town of Nyons. Fred was using pre-stretched canvasses at this point and these had to be ordered in specially as the shop didn’t hold enough stock.  As in his early career, on occasions Fred would find he had run out of materials and often painted on scraps of wood or card in the absence of canvas. 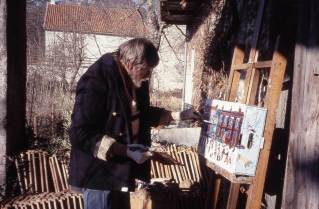 Fred lived a frugal existence and his houses were little more than studios with room for a bed to sleep in and very basic amenities. In La Motte although his house was basic at best Fred personalised it with small items and he even created a Self Portrait mural on the tiles in his kitchen. 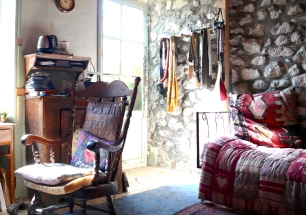 In La Motte Fred had a regular routine and everyone knew him. He would rise fairly early, eat breakfast in a little café (often with a small cognac) then ready himself for his days work. If painting further afield he would take a taxi but was usually back for lunch at another café with local workers. In the afternoon, if not painting, he would often do a few things around the house. Typically he would eat light in the evenings and retire to bed early, sometimes listening to a bit of music.

The back garden of Fred’s house provided a fantastic outlook towards the mountains. This was an invaluable source of inspiration and meant that Fred didn’t always have to venture out to paint. The view became a subject that Fred painted many times in all different guises.

View out of the window La Motte 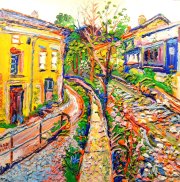 As time passed Fred had achieved much of what he intended when he set out in France
many years before. Exploring the French countryside and painting daily where his own heroes like Van Gogh had painted before him. At this point Fred’s thoughts turned back to England and to the memories of Manchester and Cornwall. With this in mind he painted a large number of works recalling these times and paintings that he had completed years earlier. These works were even bolder than the colourful impasto paintings he was now known for and his work became far more expressive and nostalgic. Many of these works were seen in the Last Paintings show at the John Martin Gallery in London in early 2016. 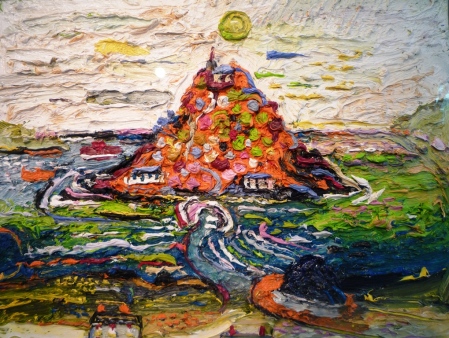 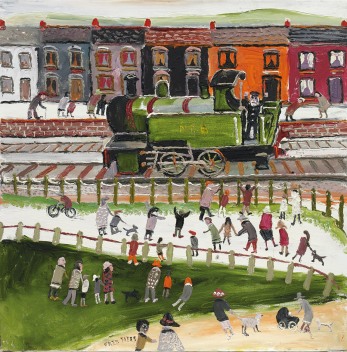 Fred Yates had moved to France for a new adventure, to follow in the footsteps of some of the greats before him and to be free from the restrictions and pressure of the increasing demands on his time and energy. This left him free to develop his art seemingly unaffected by expectation and current thinking and thus he was able to discover his own raison d’etre and a wonderful and magical world.

FYG would like to offer extreme gratitude to Francis Mallett for the kind use of his Guardian obituary piece and other information and to White Lane Press for photos relating to Fred Yates’ time in La Motte.