In 1969 at the age of 46 Fred Yates finally plucked up the courage to quit his career as a teacher and moved to Cornwall to paint full time. He settled in Fowey and bought a double fronted Fisherman’s cottage on North Street, just a stone’s throw from the river. The life that he had been yearning for, while seemingly imprisoned in a classroom for the last 15 years, had finally begun. He was now a full-time painter. 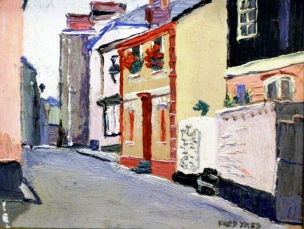 Fred knew that life would be tough but he could live frugally and supplement his income
with odd-jobs. To this end he mowed lawns, painted and sketched property hoping to sell the works to the owners and even sold books to a local bookshop to raise funds for materials. Despite the trademark simplistic nature of Fred’s paintings his signature style be lies the skill of an accomplished Draughtsman. Yates was capable of the most exquisitely detailed pen and ink drawings. He built up a large folder of these works which he was very proud of and always kept close to hand. 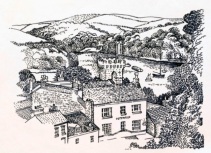 From his cottage in North Street with its garden that extended high above the rooftops, Fred was afforded a fantastic view over the river. He was keenly interested in the river’s daily activity and in particular the great vessels that collected the China Clay from local quarries.  He embarked on a large series of paintings depicting all manner of these imposing and sometimes brightly coloured ships.

Large Vessel on the River

Boat on the Fowey

From his base in Fowey Fred was free to paint in a whole host of beautiful and secluded locations. This provided the perfect opportunity for him to hone his technique and catch up on what he considered to be the ‘lost time’ spent teaching. 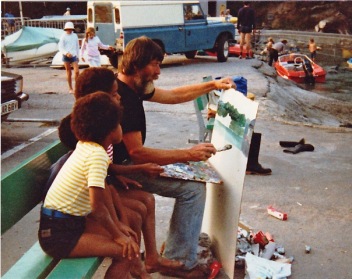 The Fred Yates in Fowey story will appear here soon.